IS IT THE SHOES?

In today's post, I wanted to talk about something that is running wild on eBay--other sellers stealing your images to use as their own. I have probably had this happen to me hundreds of times since I started selling on eBay and honestly, it used to happen a ton back in the day because the technology in the early days of eBay was limited and not too many people had good photos or even knew how to take good photos.

Back in late April, I was at my local thrift store when I stumbled across a pair of Harlem Globetrotter shoes. I made a video HERE where I picked them up but, when I got home and did some research, I couldn't find anything related to them. At that point I realized they were pretty rare so I tossed them up on eBay as buy it now for $340.00 with free shipping. I started to get watchers within in the first 2 days and I figured it was going to be a good flip considering I paid $50 for them.

The next day I went back to the thrift store because they had 2 pairs (one which I had purchased) and I was going back for more. When I went back to Salvation Army, they where gone so I asked one of the employees if they had more and they said there was about 30 pairs they sold in total. They basically set out two at a time to entice people to buy them for $50 each. At that point I realized that some of these would have to surface on eBay. Well, a week later, they started popping up with crazy prices. Some people were selling them for $60 shipped on auction, but there was nobody that had a buy it now or best offer. I figured I would play the waiting game to get top dollar for them. In the meantime, I came across this seller (Images below) who had stolen 2 of my photos from my listing to use 1 of them as their main image. I take great pride in taking good photos, so I realized this was a problem and I messaged the seller and said she had 24 hours to remove the photos or I was going to contact eBay. The good news was the seller did this, which I was pleased with, but the fact is that this seller (who had their own photos) tried to steal my image to sell the shoe for a lower cost than what I was selling. Hey, competition I understand. I'm not complaining other than the fact this seller stole my images.

Here is my listing where I ended up selling these shoes for $185.02 with free shipping. 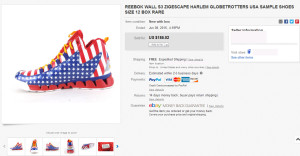 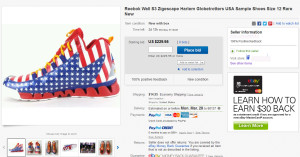 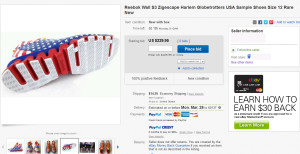 After I messaged the seller, they removed my images from their listing 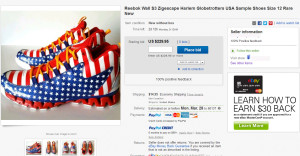 The seller ended up selling the shoes for $129.90 including shipping 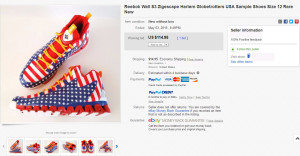 The moral of the story is to watch your competition so this doesn't happen to you. If it does, send them a message and if they don't comply, contact eBay. The majority of sellers just list items and forget about them.  They never wonder what the competition is doing on that same exact item and that could be the #1 reason why your item is not selling. This is why I'm always doing research before and after I list items. Reselling is a competitive market and it is growing! You can play the waiting game on rare stuff like this or you can fast flip them. Honestly, it depends on your business model. With these particular shoes, I started seeing more and more listings for them so I decided to lower my original asking price and BAM! the shoes sold for $50 more than my competition.  Happy Hunting!